I use mini whiteboards frequently in my lessons.  I do this to gauge pupil performance in the execution of whatever procedure I am teaching.   As learning takes place in the long term it is impossible to gauge this in any particular lesson, however, if the pupil is unable to execute the procedure correctly then I think it is safe to infer that learning is likely not happening to the extent one would desire.
What I have failed to do, with enough frequency, is to develop a proxy for gauging understanding. I sometimes use tasks such as “always, sometimes, never true”, categorising and odd one out in my teaching.  This is somewhere I am developing practice.  However, the most recent idea I’ve been playing with is that of learners generating examples.  The mini whiteboards can facilitate this efficiently.
Lesson One:  High Attaining S2
We’d covered linear equations to a very high level and the class demonstrate real fluency with the topic.  Having spent a few days labouring the basic principles about inequalities we’d been solving simple in-equations such as :
-5 < -x + 2
Instead of moving on through the exercise as normal, the pupils were asked “if you were me, what is the next question you would ask?”
One response was as follows:

I was impressed with how the learner appears to appreciate the key points in solving linear inequalities, particularly handing the negative x coefficient on the second last line.  The learner has also dealt with the square terms correctly and formed the question so that he could subtract from both sides.
The following two questions also chose to use a square term; however, a number of difficulties were encountered.  Quadratic inequalities are something which many S5 higher candidates struggle with so this was an area I would not have chosen to venture into with an S2 class!

We can see the first learner has lost the greater than symbol and has been unsure (or knew not to) of what to do next.  The learner on the right has made all sorts of errors.  Failing to deal with the inequalities properly when multiplying by negative one, then attempting to square root a negative.

There are many teaching points which have potentially arisen here, that were not part of the “lesson plan”.  I decided that the square rooting numbers was where I would take it today. 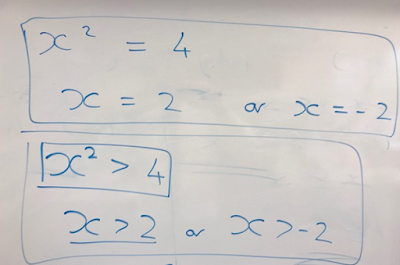 I asked what number would satisfy the equation shown.  Most replied 2.  I asked for another possible number and we established negative 2 . When I asked them to “show me” their solutions to the inequality shown above they, almost inevitably, fell into the trap of suggesting the solutions shown.
“How could we check our answer?”  One learner suggested trying different values, all of which were above 2.  We tried these.  When I asked “why not try -5?”  the response was that it was less than -2 and that I was, clearly, an imbecile for even suggesting it.  But try it they did.  I noticed the shock and surprise on their faces when it came out to be 25. A feeling I’d had on Saturday when a result I’d expected in one of the tasks John and Anne shared had an unexpected twist.
We discussed how we could be more systematic in our testing different values of x.  Somebody suggested an ordered list, which, through discussion became a number line such as the one shown.  Ticks signifying that the inequality is true for this value of x.

When I asked them to reflect on their original answer and update it based upon this observation, most could clearly see that the positive values of x2 came when x 2 and therefore suggested this was the solution.  There were many looks of “oh wow” in the room. That little bit of joy and wonder.  I smiled with a little bit of delightful menace as I said “you’ve gotta watch these inequalities – they aren’t all that they seem”.
I asked how we could change the question and a number of pupils, insightfully, suggested that we solve the following instead.

We’d spent time, early last week, stating inequalities based upon a number line representation.  I almost danced with joy when I saw one learner’s mini whiteboard….

Not only had she correctly written the inequality but she had recognised the number lines today as just another representation of the number lines from last week.  When I presented her work to the class there were audible murmurings of “oh wow, I totally get this now” and “that’s so smart”.
One learner challenged me “why did we not write it that way for the first one?”  So I asked them to do so, to show the sameness.

I got a little carried away with showing them the following on Desmos.  Recall this is a class at the end of S2 – so quadratics are not on their radar.  The graph of y = x2 impressed them, but I feel that this part of the lesson was a little rushed and understood properly by only a small number.  I was keen to get back “on track” and do some drill practice on the solving of harder linear inequalities.

Asking learners to generate examples was a risk of sorts – but the richness of the discussion, the learning and the understanding really impressed me.  This would not have happened if I hadn’t relaxed a little control of where we were going.    I didn’t expect to be going off at this tangent, but I found it valuable for both myself and the learners.  I would like to think it was an example of being both mathematical with and in front of my learners.  Tomorrow I will ask them to solve similar, related problems and perhaps create their own, in addition to the core planned material.  For myself, this lesson has inadvertently made me rethink how I approach quadratic inequalities at Higher.
Lesson Two:  “Median” Attaining S1
A small part of this lesson was of some particular significance to me today.  I displayed a rather limited (borderline thoughtless) group of terms on the board and was illustrating through circling with the same pen, which terms were “like”.  Pupils were suggesting to me what made each of these small groups “like”. 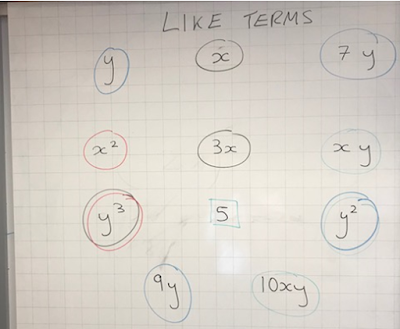 I normally ask pupils to group a set of terms into like and unlike with a particular term.  However, I felt a harder, but richer mathematically, task would be for the learners to generate a term of their own which was like and a term which was unlike.
I’ve reproduced the solution of one learner.  I was initially happy to see the 0y and 5y.  However, the non-example immediately highlighted a flaw in my initial explanation.  There were no negatives, fractions or decimals to be seen.  This is something I am always reminding colleagues to inlcude, and here I was ignoring my own advice, and it coming back to bite me!

We gathered all of the learner’s responses and, thankfully, a number of them had included fractions, decimals and negative coefficients in the correct group of either like or unlike.  The learners highlighted my poor teaching and then also rescued it by me sharing their understanding with each other.

Learner generated examples is something I’ve been experimenting with recently, but it is not a pedagogy I automatically go to when designing resources or tasks, or even thinking about lessons.  I feel there are real benefits to this type of task which can help to develop mathematical thinking.  Over the summer I plan to read the definitive text on the subject “Mathematics as a Constructive Activity” by John Mason and Anne Watson, and look to embed and develop my teaching in this area.

So, one lesson I was chuffed with and one that had a bit of an obvious flaw in there, but thankfully the children rescued their learning from my teaching!